The very first race for our twin daughters was a day that ended with my husband and I still laughing as our heads hit the pillow. The “City of Lakes Loppet Race” was originally supposed to be a point-to-point race through the city of Minneapolis – but with little or no snow, we figured it would be cancelled. On the morning of the race, I happened to see on the local news that the events were modified and the dogsled race was set to continue. Still in a robe and only on my first cup of coffee, I poked my bed-head into the workout room and said, “hey honey, that race is still on – wanna have the girls try it?” He hemmed and hawed and suggested we leave it up to Carlie and Chloe. Of course, the twins were ecstatic and immediately changed from pajamas into mushing gear. We’d bought the rag-tag team a year ago but had yet to race them – and with the girls participating in the ceremonial start of the Iditarod in Alaska this year, we hoped they’d get one practice race under their belt! Within the hour, we were on the road with the dogs and everything we thought we might need. On the drive, we explained that this was a day of learning and hopefully… finishing. We arrived early and found our way to the registration chalet. First glitch – no same-day registration. Uh oh. But, with a little begging and identical double smiles, an exception was made for them 😉 With race-bibs in hand, we were feeling pretty confident as we drove up to the musher parking area. Hmm… second possible glitch. Professional light weight racing sleds sat atop every trailer and most of the teams consisted of six dogs that were twice the size of ours. We only had a total of eight dogs so the girls would have two teams of four – pulling mammoth sleds. A musher walked up to our window with a smile, pointed to the blue beast strapped to our dog-box and said, “nice freight sled.” My husband, remaining proud, replied back, “yep, we made it in the garage – it weighs about 80 pounds.” The man went on to tell us about his sled that he’d just paid roughly $3,000 for – weighing in at 20 pounds. When he left, we laughed and all agreed that we were going to be laughed at. Lucky for us, we are the Beatty’s – a family that’s never seemed to care. As the race time drew near, an informal musher meeting was held in the parking lot. Out of the twelve mushers, our girls were the youngest by 20 years. The race official went over the importance of passing etiquette and he kept reiterating how technically challenging the icy course would be. When he asked if anyone had never raced before, the twins raised their hands and a seasoned musher actually rolled her eyes – as if saying, “this might be a disaster.” Glitch #3: Possible ornery mushers. My husband asked the race official if our daughters could start last; that way, no one would have to worry about passing them or getting held up. The official agreed and even told us that he’d mush a team just ahead of them in case they needed any help. We felt better and returned to the dogs to harness them up. Glitch #4: the team sensed two things in the air that sent them into hysterics. The first thing was the looming start of the race, and the other; two females that ironically went into heat. We could only laugh. The howling and barking of our team was so deafening, a man came up and told us that he could hear our dogs several blocks away. Other mushers walked their well-behaved teams of six right by on leashes. Although the majority of our dogs were senior citizens, they dragged us (and four volunteers) all the way to the staging area. And when we hooked them up to the sled… oh boy, they became more insane – lunging in their harnesses with all their might. An internal Alaskan-bred desire to just pull, pull, pull. In one-minute intervals, the other teams slid away from the starting gate, smiling and waving to the crowd. While volunteers held our dogs back, my husband told the girls to ride the break and not worry about trying to pass anyone. With that, they were on their way to running their first race. We went to the halfway turn in time to see both girls flying down a steep hill – the dogs in all their glory; tongues hanging out with paws outstretched. Airborne. Full speed, passing other mushers, no breaking. And we remembered; they’re competitive gymnasts… competitive. Like the dogs, breaking isn’t in their DNA. We wondered if this would end in one giant glitch. I decided to head back to the finish line and wait for them to hopefully come across. Over the loud speaker, the announcer commentated on various bios of racers that had come from all corners of the state. Then, as a little musher came screaming around the corner towards the finish line, the announcer exclaimed, “And here comes…a…a… a girl from Lakeville!” I couldn’t believe my eyes – Chloe taking first place! Two more racers came through and then, “The other sister from Lakeville!” – Carlie taking forth! We laughed again as Chloe climbed on top of the podium and they handed her a giant check for $500 dollars. We hadn’t even known there was a cash prize!  In the end, the musher with the $3,000 racing sled – well, he told us that he was going to look for a good ole freight sled too. With an old team of dogs and a homemade sled, our girls proved it once again; with a little faith and the ability to laugh – anyone can follow their dreams anywhere. And when it’s against all odds… it’s even sweeter. 🙂 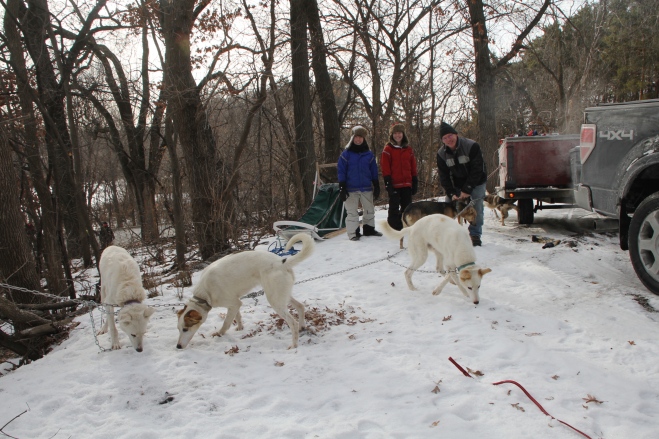 Youngest mushers to enter the race…. by 20 years!

Lining up for the race. 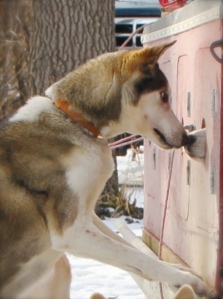 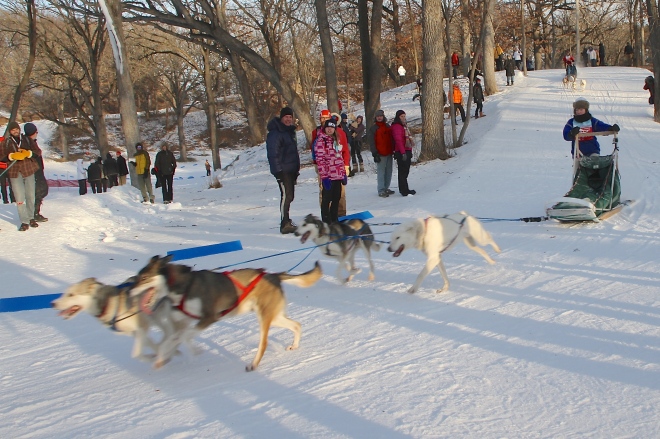 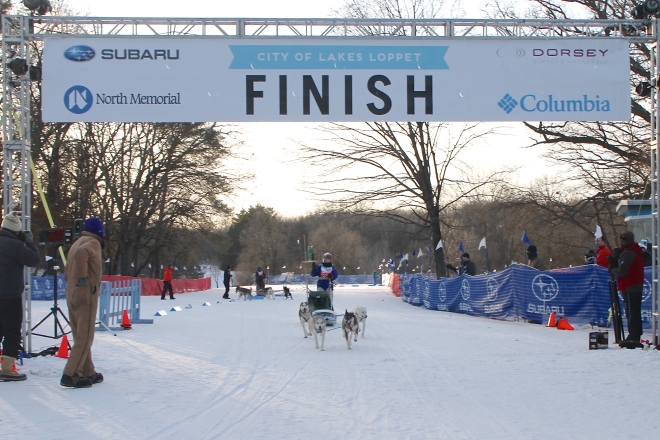 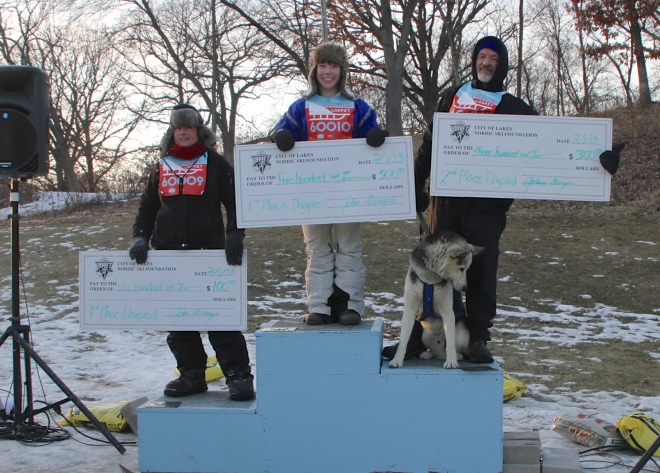 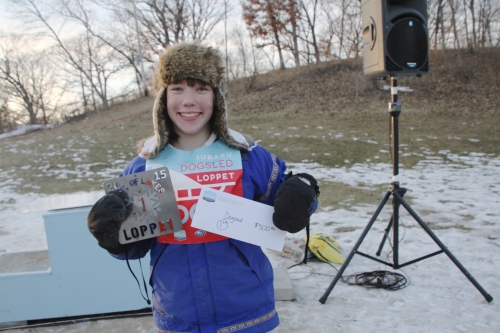