Airing on HGTV’s Living Alaska, the Berington twins, with their thick hair, love of dogs, fishing and sports -remind me so much of my twins! Oh my, am I getting a glimpse into the future? 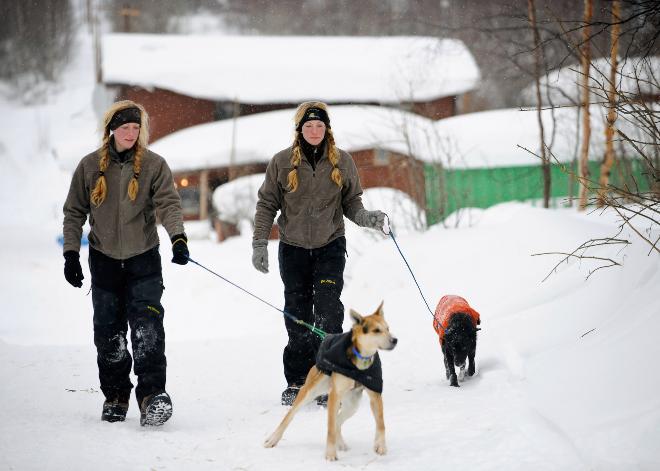 Anna Berington finished Alaska’s grueling Iditarod sled dog race 43 seconds ahead of her sister, and that was fitting, because she’s been five minutes behind her twin since birth.

Growing up in northern Wisconsin, Anna and Kristy Berington underwent the perfect training for the world’s premier sled dog race. Brutal cold, piles of snow and howling winds are just another winter day for folks in Port Wing on the frigid shore of Lake Superior.

They’re the only twins and only sisters to compete in the historic 1,100-mile Iditarod. Last year, Kristy’s third Iditarod and Anna’s first, the identical twins held hands as they crossed the finish line in Nome. But because Anna had a longer lead rope on her dogs, she was recorded as crossing first.

“We enjoy racing together. Kristy has more experience than me and she’s able to do better,” Anna Berington, 28, said in a recent phone interview as she cut beef fat to feed to her dogs.

“We’re friends more than competitors, but we’re also competitive by nature. I think Kristy expects to beat me, which is OK because she has a five-minute head start on me in life.”

They’re racing in this year’s Iditarod, which is scheduled to start March 2.

Their mother, Janet Berington, is a bit astonished at her daughters’ choice of career path, but then they’ve been a surprise since they were born. Janet Berington didn’t know she was pregnant with twins. The family didn’t have health insurance, and ultrasounds were not as common in 1984. The twins’ heartbeats were in sync and the doctor only heard one.

So when 6-pound 5-ounce Kristy was born the doctor was shocked at her size considering Janet looked like she was carrying a much bigger baby. But then he realized another was soon on the way, and five minutes later Anna arrived, weighing 6 pounds 13 ounces.

For sisters whose heartbeats meshed so perfectly, it’s not surprising they’re close. They both played basketball and volleyball at South Shore High School in Port Wing, joined the Wisconsin National Guard right out of high school and moved to California to live in a tent together and work at a sled dog touring business in Lake Tahoe while guiding tourists on horseback through the Sierra Nevada mountains in the summer. When Kristy traveled to Alaska in 2007 and met 1984 Iditarod winner Dean Osmar, he convinced the twins to move to the 49th state and try a different type of dog sledding.

Now the sisters live in Kasilof, Alaska, and work for two different dog kennels – Anna with Osmar’s kennel and Kristy with another veteran dog sledder’s. It costs a lot to run a kennel, and each Iditarod-caliber dog can cost as much as $1,000 a year for food, veterinary bills and training.

Neither twin has enough money to operate her own kennel, but like many people starting out in the sport, they work for other dog sledders, training and caring for dogs while either renting dogs for races or using dogs to race as part of their salary. They spend much of the spring, summer and fall working construction and commercial fishing jobs to save up enough money to support their dog sledding careers.

Dog sled racing is not cheap. Competing in the Iditarod cost the twins more than $16,000 each last year including the $3,000 entrance fee as well as gear, food and transportation. Plus there are the costs of smaller races they compete in during the winter.

Still, competing in the Iditarod is as much a part of testing themselves and their dogs as it is spending time in the breathtakingly beautiful Alaskan wilderness.

“It’s not racing I’m really attracted to, it’s just being out there with the dogs and being self-reliant and remote,” Kristy Berington said in a separate phone interview. “The races allow you to explore places you’ve never been.”

Each had completed 2,000 miles of shorter races before competing in the Iditarod. Last year they spent most of the race traveling together, leaving treats like peanut butter cups in the snow for the following twin to find. While it’s hard for many to tell the twins apart, even their dog teams have difficulty. So it’s not surprising that sisters who often finish each other’s sentences also have similar dog team command styles.

During last year’s Iditarod, Kristy was ahead of her sister and as she neared the bottom of a hill she gave her dogs the command to move faster so the team would be clear of the hill when Anna and her team descended. But Anna’s dog team thought Kristy’s command to pick up the pace was for them and they sprinted down the hill.

As the more experienced Iditarod competitor, Kristy admitted she sometimes worried about her twin, especially since Anna lost small parts of her big toes to frostbite during a shorter race. In that shorter race, the Knik 200, Anna’s feet turned gray halfway through the race, and though she could have dropped out, she wanted to finish.

“We did the best we could and traveled together. She’s so inspirational to me to do that and still take care of her dogs,” said Kristy, noting wryly that they can no longer share shoes because Anna’s feet are now smaller. “The reason she got frostbit, we were speculating, is she tore her leg open with a hook a week before. She got 28 stitches, so with that on her leg it was hard for her to run with her dogs.”

Both hope to start their own kennels some day and have acquired their own dogs. Kristy has a couple of her own dogs, while Anna named her dog Kelsey after the boat that rescued her when the fishing skiff she was working on capsized during the summer of 2011. Anna and the rest of the crew clung to the overturned boat in the cold water for about 20 minutes before their rescue.

Kristy knows this sounds crazy, but she had a dream the night before the accident of Anna coming into her room soaking wet to tell her that her fishing boat had capsized.

The Berington twins got interested in dog sledding while growing up in the tiny community of Port Wing, where a family friend participated in short races. They both love animals and decided, after a few semesters of college and service in an Ashland-based National Guard engineer unit, to move to California and work as dog sledders.

Now they attract a lot of attention at races where men hold up “marry me” signs as the 6-foot-tall blond twins pass by behind their dog teams. Kristy has a boyfriend; Anna recently broke up with her boyfriend, who’s serving in the Air Force.

Their older sister Kat handles their website and acquires sponsors. Their father, who is 6-6, lives in South Carolina; their mother, who is 5-9, lives in Port Wing and works in a lumber company office. Janet Berington doesn’t have Internet access at home, but her older daughter called during last year’s Iditarod to give her daily updates. She kept an Iditarod map by the phone, and when she learned her twins had made it safely to a checkpoint she checked it off on her map.

“At first I worried a lot. I still worry, but I worry less, because they’ve done a lot of races. You read stories of things happening to even seasoned mushers,” Janet Berington said. “It’s exciting, too. They get a lot of attention because they’re identical twins.” 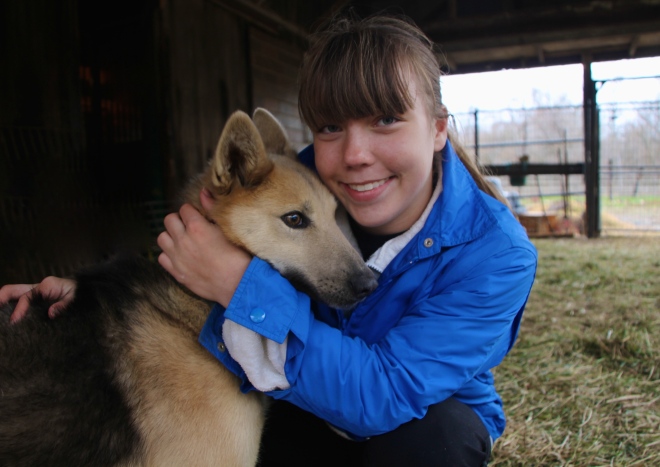 A few weeks ago we learned that a highly acclaimed dog musher was selling his entire kennel, including 50+ dogs. We drove up north to check out his dog sledding equipment and were surprised to hear that all of his dogs sold within one week! When I asked him if it had been difficult, he told me that it hadn’t been because he’d recently been so successful at winning races. I said, “no… I mean, was it difficult for you to get rid of your dogs.” He stopped for a second, drifting into a thought, then answered, “there was this one dog…his name was Asland” and with a glisten in his eye he added, “he was my best dog ever.” The strong musher quickly changed the subject but it was too late, I already caught a glimpse into his heart. I knew that Asland must have been special – but I’ve also come to realize that sled-dogs just have a unique way of taking hold. Several days later, I called the lady that we’d gotten our team from and mentioned that we wanted more dogs. She asked me if we’d be interested in buying a female dog that was in the process of being bred with her new male dog… Asland. What are the odds! It was too coincidental – we couldn’t pass it up! We picked up beautiful, sweet, (pregnant) Darby today. Honestly, we already love her.
*Stay tuned – puppies in June!

With no more snow to sled on, this spring has left us in a sort of mushing lull. We’re still trying to figure out how we’re going to dry-land train the team, so in the mean time we’ve been taking the dogs on short walks and playing with them outside in a corralled area. The dogs are still residing in the horse stables, but we’re planning on moving them outside to a dog yard as soon as the ground is thawed enough to install posts. Here are some fun photo’s of the girls playing with the dogs. *Stay tuned… we have some big news coming this week!

Although the snow is quickly disappearing near the Twin Cities, the last weekend in March didn’t look like much like spring in Northern Minnesota! We all had such a fun snowy spring break in the BWCA! Before heading home, we took the dogs on one last ride near the Boyscout camp in Ely. The trails to Flash Lake and Snowbank Lake were gorgeous – rolling hills, blue skies, and fresh bobcat tracks everywhere! And the dogs performed perfectly; following commands and pulling like champs. We’re really getting to know the personalities of each dog and it’s been fun having them warm up to us more each day. We feel like we really hit the jackpot with this team – such a perfect fit for our family! As I sit and write this blog, the snow if falling outside but I know it’s just a tease. It will most likely be another eight months before we can run the dogs on snow again. One of my girls actually said, “I smell grass; that’s sad.” Haha! This winter was the 5th coldest in history and it’s been our best winter ever – which just goes to show, it’s what you make of it!  *Stay tuned for our upcoming dryland training – count on mishaps 😉 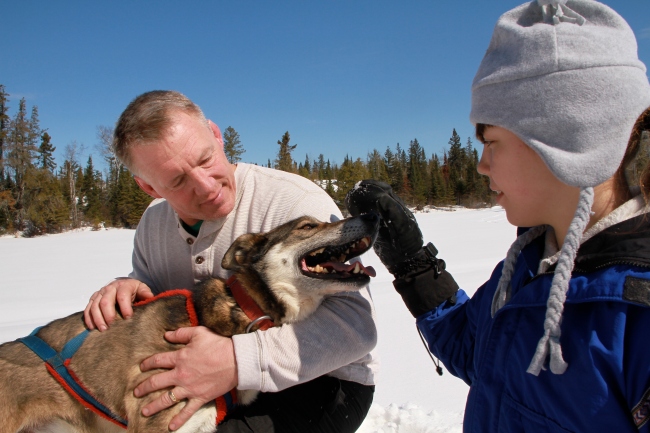 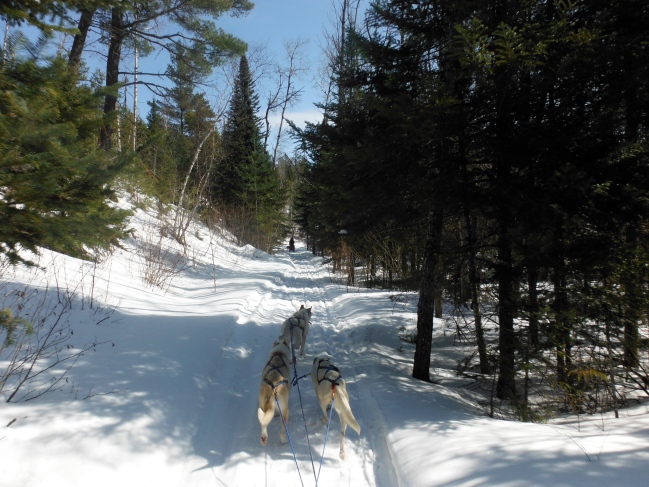 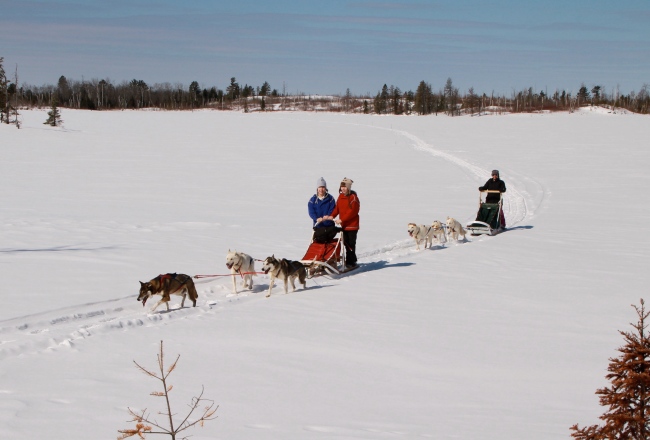 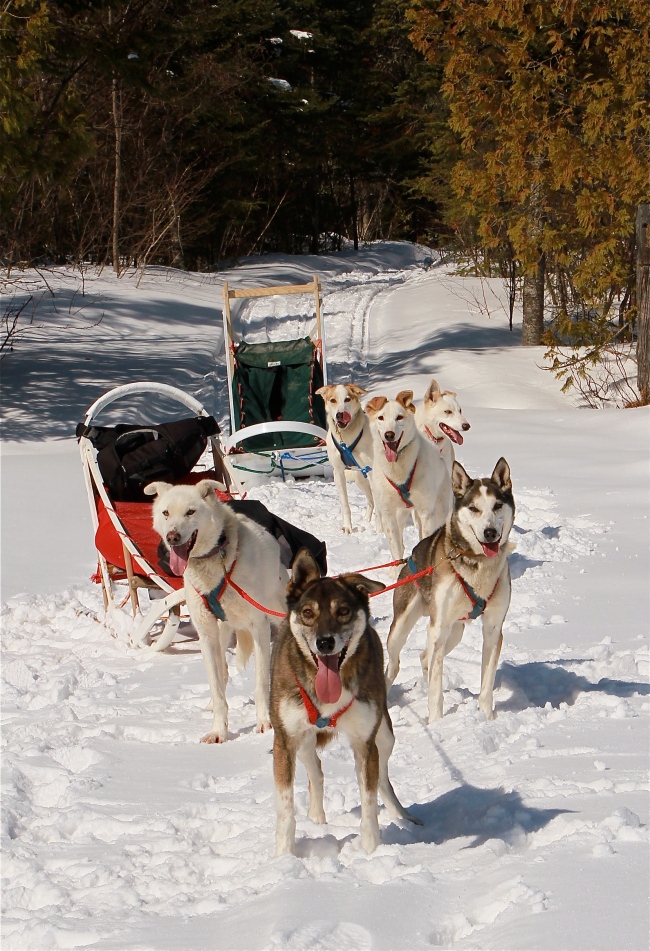 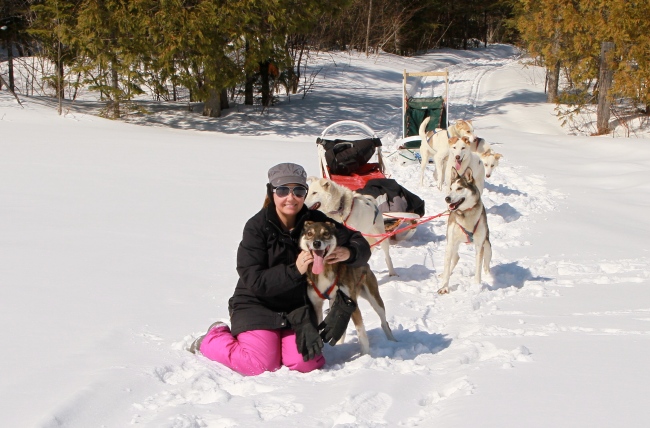