For our first trip into the Boundary Waters with our own team of dogs, we decided to go to the Hegman Lake entry point in Ely. It’s said that there are some of the best Native American pictographs to view on the cliffs of the lake so we were hoping to find them. The first portage onto South Hegman was picturesque with enormous pine trees lining the trail. There was a fairly steep decline onto the lake so we walked the dogs down and did fine. Going across the first lake was smooth until we approached the second portage and our lead dog (Fast Eddie) kept wanting to turn around. We soon found out why – a foot of slush ahead from the trickle of an incoming stream. Not knowing the lake, it was a little scary. We pushed through and went over the second portage and onto North Hegman where the pictographs were located. The thing about venturing out to see pictographs in the winter though – everything is covered in snow! Just before the lake narrowed, we made the call to turn around and head back. Later we found out that the pictographs were in the narrows! We were so close! We thought about going out again the following day but the temperatures rose and we didn’t want to risk it. Looks like we’ll be seeing the pictographs by canoe this summer! 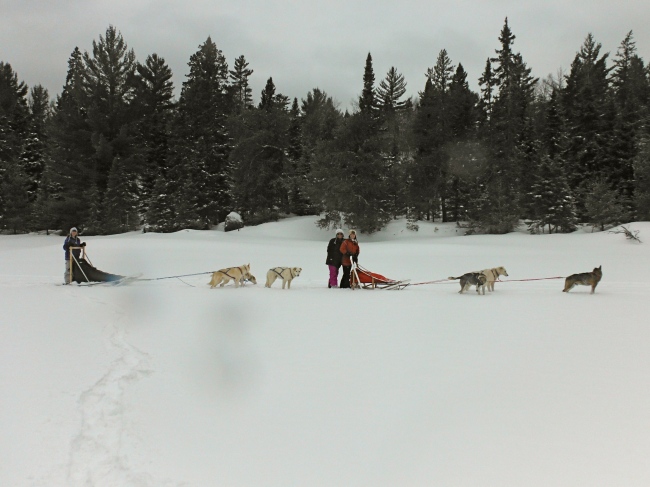 Venturing out onto Hegman Lake 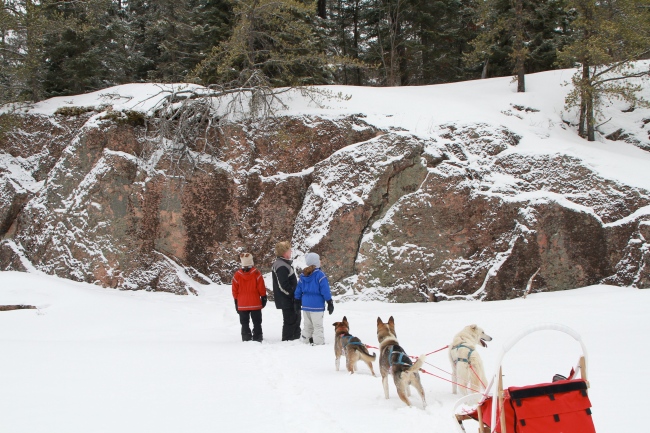 Are there pictographs here? No. 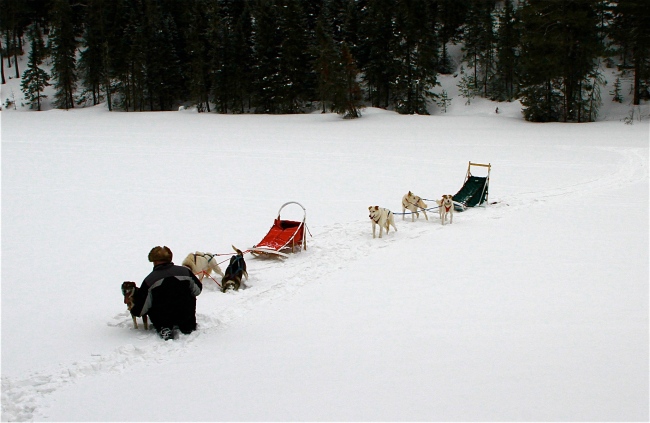 Giving some love to our lead dog who did a good job getting us through slush! 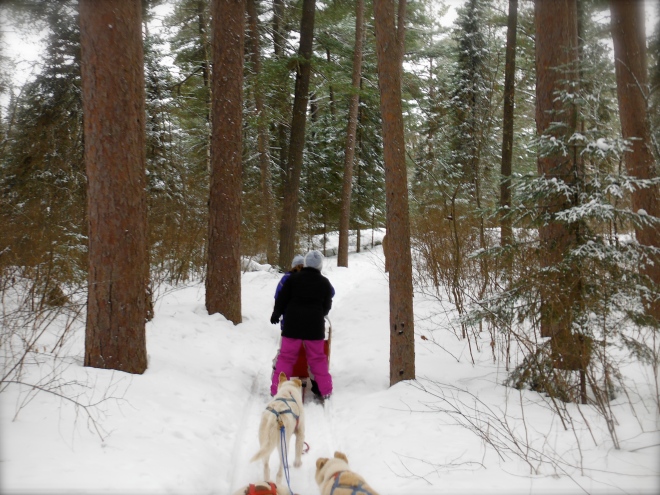 Beautiful portages that must be experienced to fully appreciate! 🙂 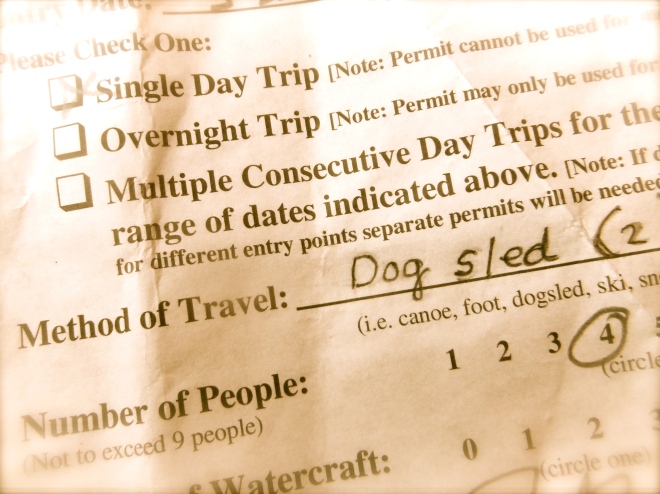 Just when we thought our season of dogsledding days were numbered, the mushing stars aligned once again for us. With piles and piles of unseasonable snowfall blanketing northern Minnesota, we set our compass (Auto Nav) to Ely, MN. – the dogsled capitol of the world. After such a long winter, everybody else headed south for spring break and our kids were just as excited to go north! Okay fellow Minnesotans, this is my confessional; it’s been me all along!- Praying for continued snowfall to serve my mushing addiction! Not saying that I’m favored by God, but wow, we’ve had a lot of snow. Just sayin;) Oops, veered off trail a bit- back to the story. Well, we hadn’t yet traveled overnight with our team of dogs but what could possibly go wrong? – I mean, we’ve got six weeks of experience under our belts! Actually, therewas a bit of prep work involved for five days away. Food was a big thing – 1 pound of fresh meat plus one cup of dry food for each dog per day. Thankfully, FurEver Wild (where we board the dogs) supplied us with plenty. With the dogs sleeping in the dog box, we filled the boxes with hay to keep them warm. During the day, mushers hook each dog up to a picket line and provide them hay to lay on. Thank you, Mushing for Dummies, for that info. 😉 We ran our line from the trailer to a tree – stupidly giving the end dog enough space to chew off the wires to the trailer lights. Books can’t teach everything – mush and learn I guess. Then there’s all the extra’s to remember – sleds, ropes, lines, booties, snow hooks and duplicates of everything. The dogs did well on the five-hour drive, stopping once for each of them to pee five times. With such a change in environment, you’d think that the dogswould be nervous but I think it’s quite the opposite. It seems like they can sense upcoming adventure and in the midst of the wilderness, they feel alive. BWCA, here we come! 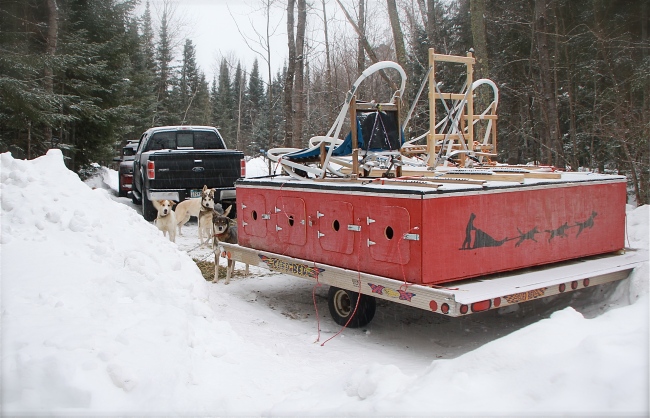 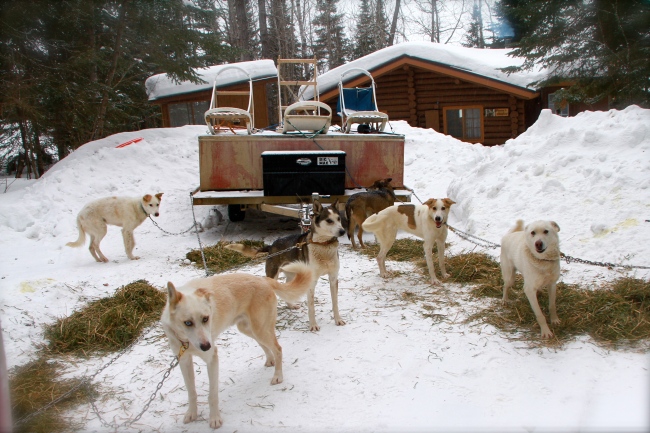 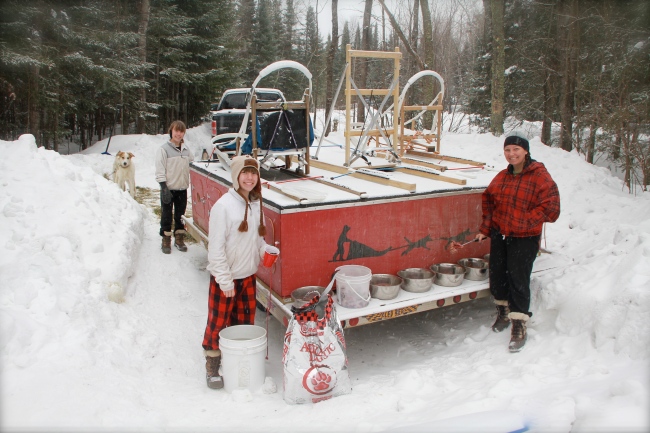 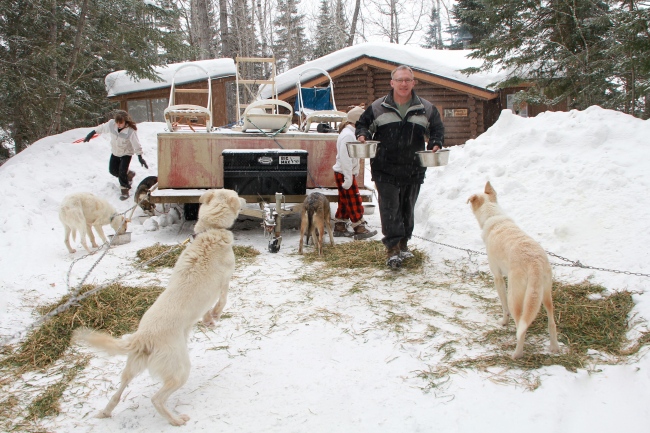 just when we thought we were having all the fun dogsledding, we found something equally as fun – introducing people to the sport! Feeling a little more confident in our skills with the dogs, we took out family and friends this week, just in time for the spring melt!

Looks like our snow will be gone soon here in the cities, but the dogsled capitol of the world (Ely, MN) still has plenty of the white stuff – check out ely.org for dogsledding adventures! 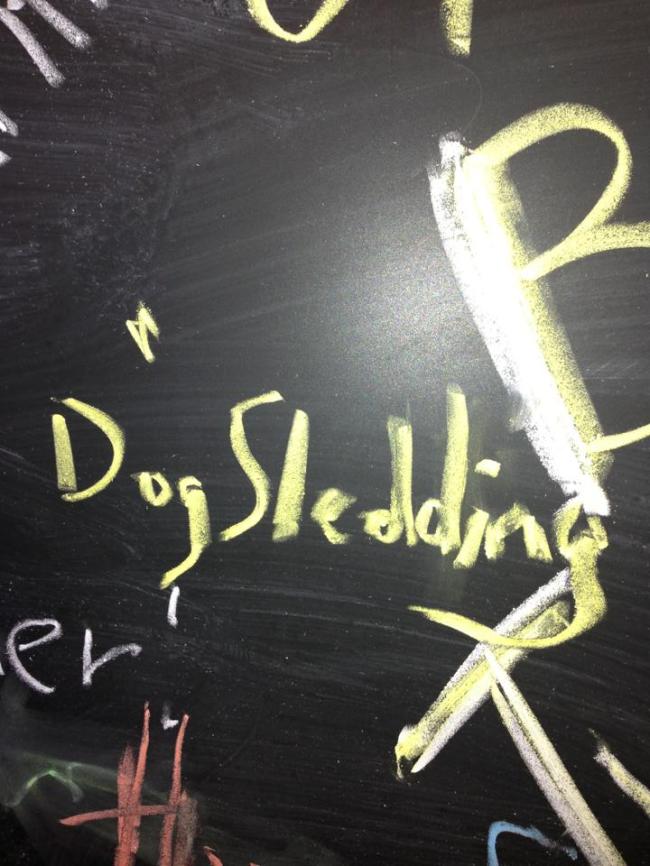 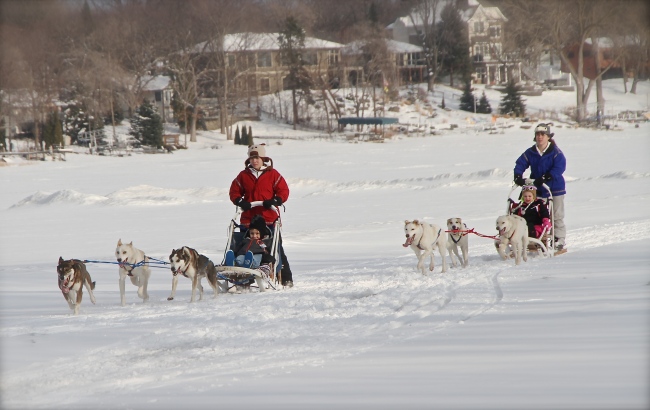 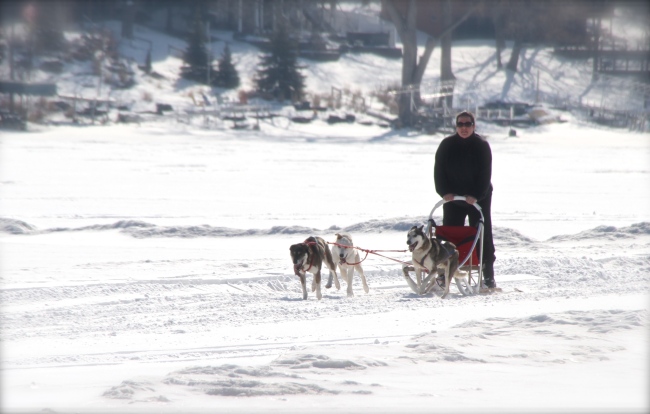 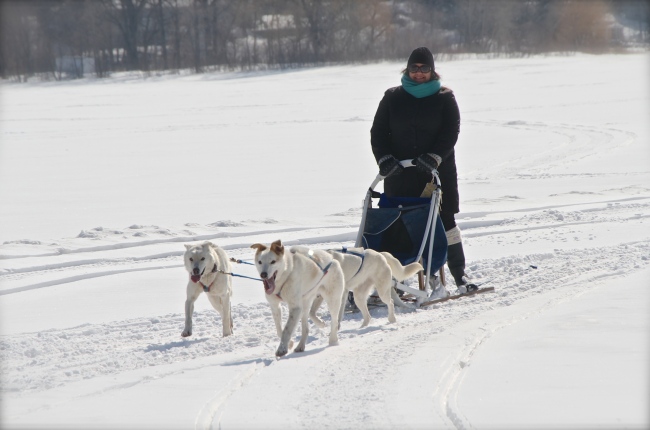 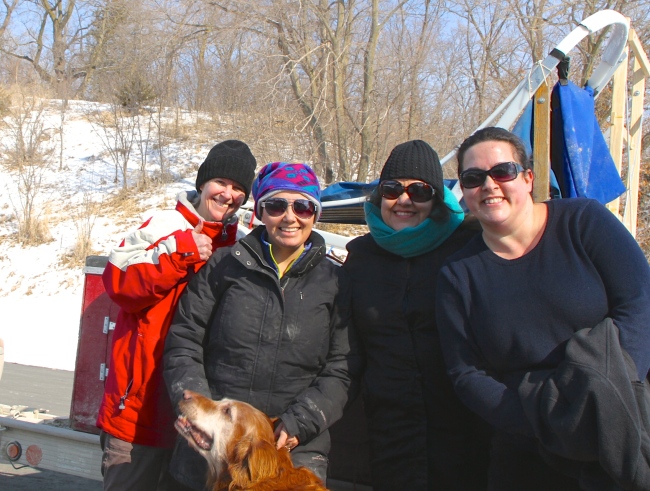 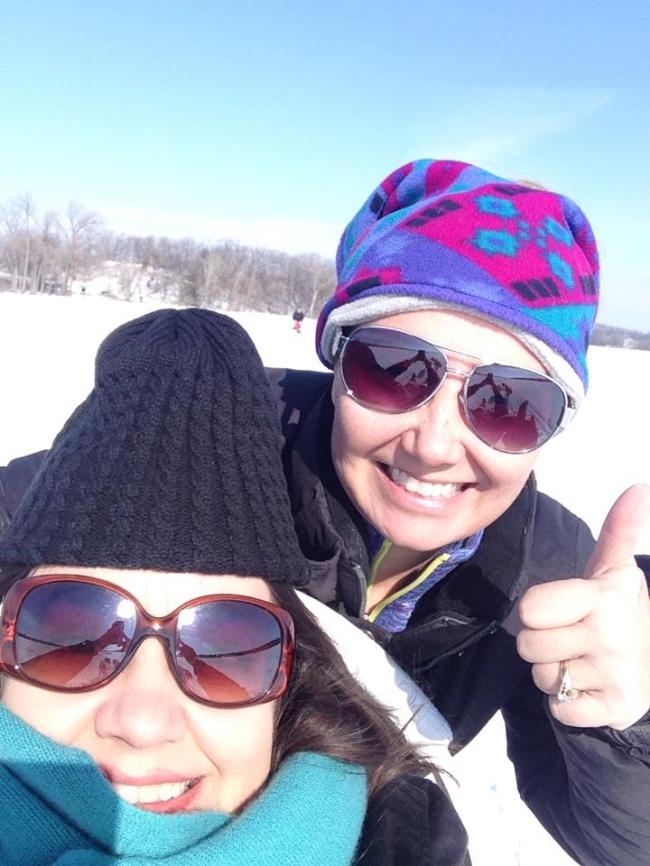 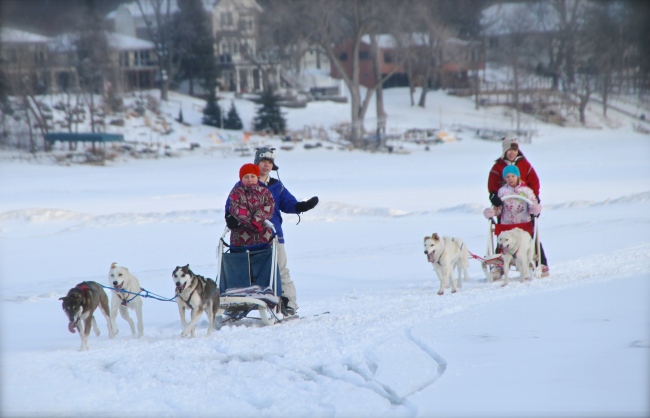 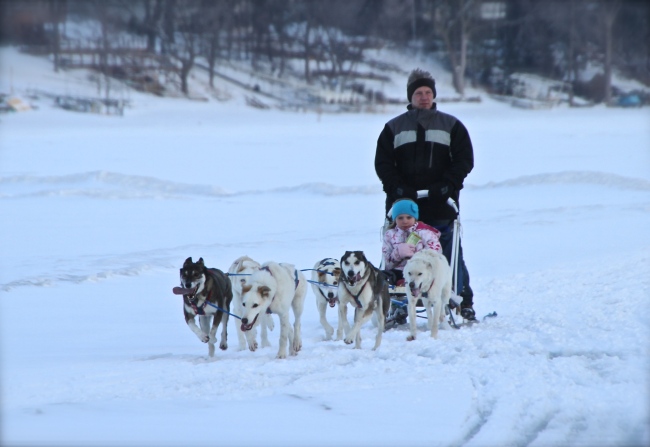 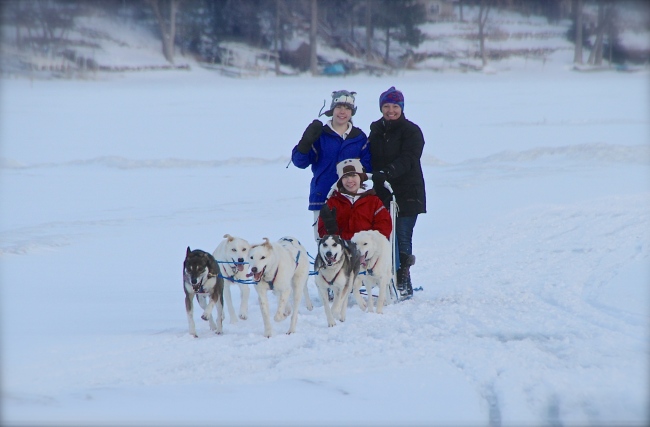 With March rains washing away winter, we wanted to take the dogs out for possibly one of our last snow packed trail runs of the season. The trail however, was something that we hadn’t met via dogsled before – solid ice disguised as beautiful snow! The combination of slick trails and the dogs’ sixth sense of spring, led to a FAST rookie adventure today – clocked at 21mph… all caught on our new Go Pro! Uh Oh!

Sorry fellow Minnesotans, I am praying for more snow… we can’t end the season with 2 crashes caught on camera!

Three weeks into dog mushing and I’m in desperate need of ten new fingernails and a live-in masseuse. It’s become clear that hilly, tree-lined trails are not a rookie dog sledders friend! So when we found a nice dogsledding loop with gentle rolling hills, my back, neck, and cuticles were relieved. Beautiful Lake Byllesby, located in south-central Minnesota, offers wide trails without overgrown branches to knock you off your sled. Not that it would ever happen… three times in one day nonetheless! 😉 Although the husband and I are getting better every time we’re out, another clarity has come to our attention – our children are naturals! *Video proof!

Going into our 3rd week of sled-dog ownership, we still have a lot to learn – but, here are some details about the dogs and what goes into caring for them.

As you’ve probably seen in the movies, sled dogs are usually portrayed as huge fluffy Siberian Huskies. While Siberian’s and others like it can certainly pull sleds recreationally, they are not the breed for racing. Alaskan Huskies are dogs built for speed, endurance, and arctic temperatures. They are usually a mix of husky and hound and weigh more or less than 50lbs. We chose our dogs because we would like to try racing and we also like the smaller size; easier for the kids to handle. Since we knew that we wanted Alaskan Huskies, that helped narrow our research. We also wanted a team with mature dogs that were trained to know the gee/haw commands (right/left). We were fortunate to find StoneyCreek kennels in Tofte MN. and they offered us exactly what we wanted – an experienced team of six with the oldest being eight and the youngest being three. *More specifics on each dog pictured below.

Since we live in the suburbs (and we’re already pushing our boundaries with backyard chickens) we kennel the dogs eight minutes from our home. We lucked out again because our boarder (Fur-Ever Wild) is able to provide the dogs with fresh meat every day. The dogs are only fed once a day and there is a method to feeding race sled dogs. They are trained to eat very quickly (like on the trail) and it’s recommended that we do not feed them at the same time every day – as this would not happen on a long distance race. Each dog eats 1 pound of fresh meat and 1 cup of high protein dry food each day (Docs Choice). We put the meat and kibble together and pour water over it so it’s like a stew – that way, they stay extra hydrated. Dogs can get easily dehydrated in very cold temperatures. So far Fur-Ever Wild has fed them steak, burger and their favorite – fish! With so much raw meat, they do need to be given a de-worming pill every month.

I will get more into the techniques of training when we become better at it! For now, here are the dogs with descriptions below each photo. 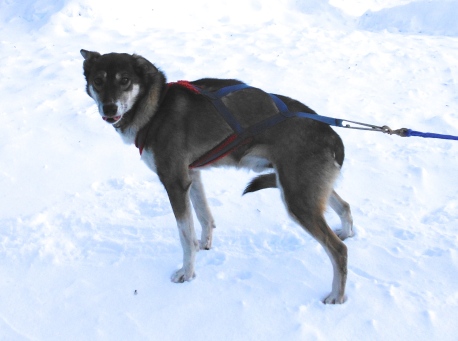 This is Eddie – AKA: Fast Eddie. He is 7 years old. He’s the best leader and such a hard worker. When we harness him up and hook him to the line, he holds it tight for the rest of the team of be clipped in. And when we’re on the trail and stop, he looks back at me for direction. He is also extremely sweet and never growls at the other dogs -he’s a favorite for all of us. 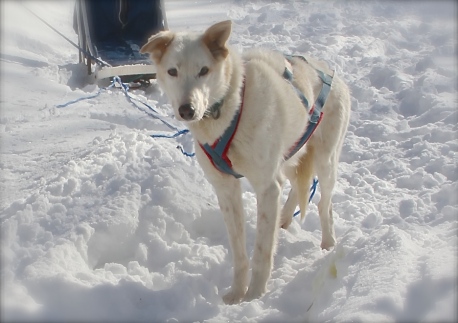 This is Sid – Eddie’s brother. He is 6 years old and has the warmest brown eyes. He is also a leader but likes to be beside Eddie, not ahead of him. We kennel both Sid and Eddie together because they are so gentle and don’t even fight over food. Sid is probably the most gentle of the dogs – also a favorite! 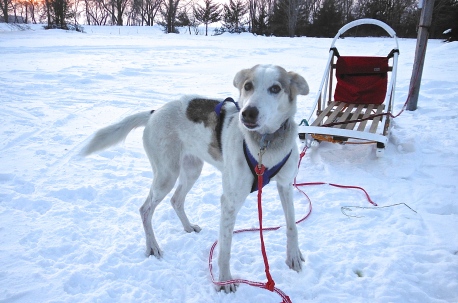 Dejour (DJ) is 3 years old and is our only female. She the quirky one in the group. She’s the only dog that jumps up on us but when she does, it’s like she’s trying to give us a hug! It’s so funny. She’s crazy on the trail too; always jumping over the line and flirting with the boys. She loves attention and is one of my favorites. 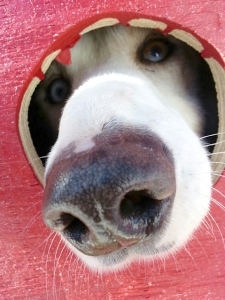 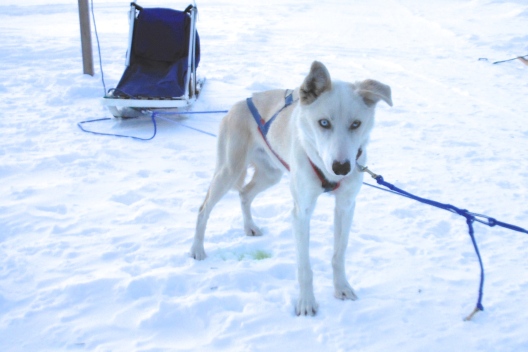 This is our blue-eyed Jackson. He is 7 years old and shy and mellow. He’s very strong and a really good puller. Jackson is a good part of the team and with his stunning eyes, he seems to be a favorite of most people. 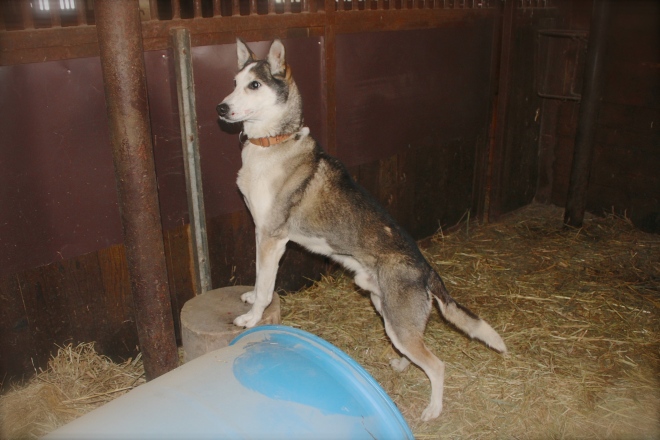 This is Hamilton. He is 10 years old and beautiful. Out of the 6 dogs, he looks most like a husky. Hammy is very reliable and even though he doesn’t like to lead, he’s a really hard worker. So far, he hasn’t seemed to care if he has much attention – he’s pretty independent. He is also a favorite. 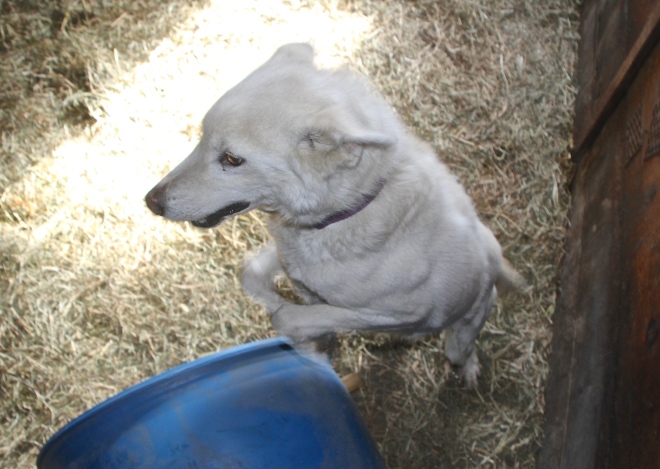 This is Prophet. At 10 years old, he too is one of our oldest. He is our biggest dog and still very powerful. He has a really nice demeanor and pretty warm eyes. He bangs against the door when we enter the barn – and as you can see, he’s hard to photograph. Like the rest, he’s also a favorite! 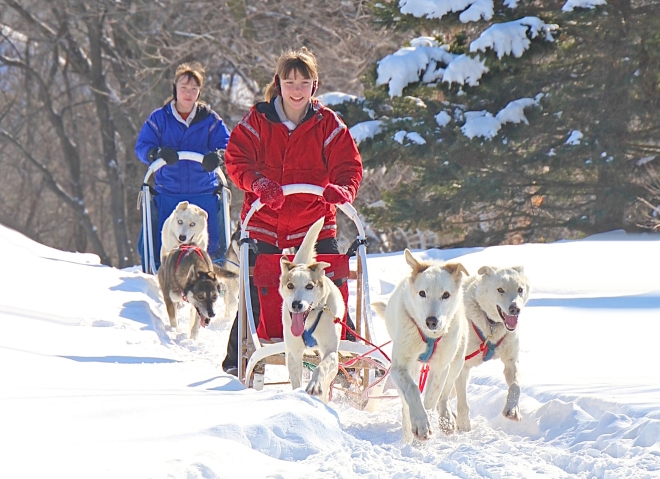 It’s been two weeks now since we’ve owned our six sled dogs! Our first couple of experiences on the trail were somewhat embarrassing, but our run on the lake yesterday went very smooth. I was impressed as we all worked seamlessly as a team without even realizing it; the kids harnessed dogs and straitened lines while my husband unloaded and hooked up sleds. I of course, took my job seriously as resident photographer. Documentation is very important 😉 The dogs ran nice and steady on the trail – this time, without trying to pass the other sled too much. We still need to figure out how to turn the teams around without ending up like a big ball of tangled Xmas lights – but I’m guessing we’ll get there… puppy steps right? I’ve also noticed a cool groove happening when we go to the barn to feed the dogs. As I cut meat and prepare bowls of food, my girls play with each dog and automatically clean up their kennel areas. It appears that as our transition as owners takes shape, the dogs are learning to trust – and even love us! 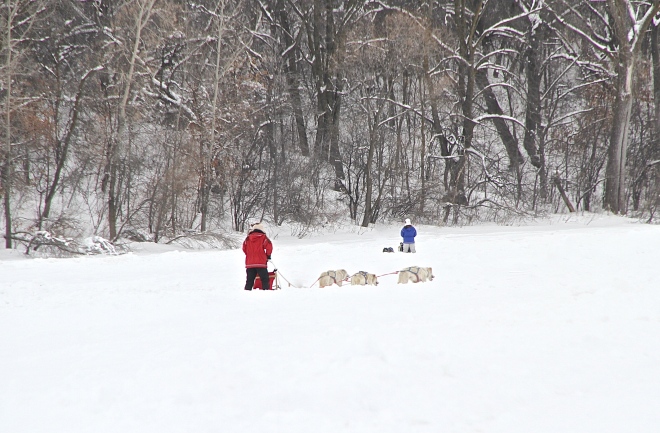 When we decided to buy sled dogs and become suburban mushers, it was amazing how many people made the same comment in a different way. Some said, “you’re crayzzeee!” in a genuinely intrigued kind of way, while many responded with a monotone semi-sacrcastic, “YOU, are crazy.” Thankfully, as our track record reflects, we’ve never cared much about what people think! And guess what, I think it’s been a big benefit to our kids. Because we haven’t been afraid to try new things, the world has been a pretty cool place to experience. We have embraced the seasons of life, known failure, been grateful for the gift of patience, and have felt the reward of hard work. With dogsledding in particular, we’ve understood the beauty of silence and have had our hearts be stilled in the white wonder of God’s creation. So yeah, our new adventure is crazy. We’re glad to own the label! Don’t be afraid! Hike!